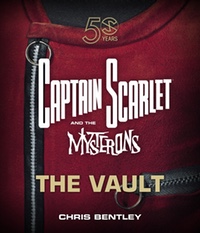 Captain Scarlet and the Mysterons made its television debut in 1967, presenting a dark and sinister science-fiction drama that has captivated audiences ever since. The scenario depicted a world at the mercy of ruthless attacks from vengeful Martian computers with the power to raise the dead. The puppetry techniques behind the series were similarly unprecedented, elevating Gerry Anderson’s ‘Supermarionation’ to new heights of sophistication. Here is the definitive story of a television classic, told by the people who made the series and illustrated with a wealth of previously unpublished images, including new shots of the original puppets, studio models and vintage merchandise.

Chris Bentley compiled Menace from Space, the latest volume in the acclaimed Century 21 series of comic strip reprints. Chris is the former chairman of Fanderson, the official Gerry Anderson appreciation society, and is acknowledged as one of the leading authorities on the producer’s long and varied career. He is the author and co-author of seven books on the subject, as well as the 2007 guide The Avengers On Location.