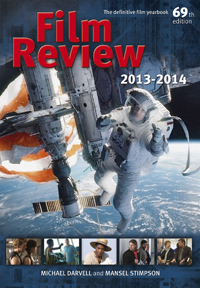 Founded by F Maurice Speed in 1944, Film Review is now celebrating its 70th anniversary. Acclaimed by critics, collectors and industry professionals, this is the only guide to provide essential credits and reviews for all theatrically released films in the UK. The 69th edition includes reviews of every film released from January to December 2013, box-office statistics, new faces of the year and a detailed chapter of showbusiness obituaries.

The co-editor of Film Review has long been the chairman of the Eastbourne Film Society, and has introduced films and led discussions at London’s National Film Theatre. He was a reviewer and interviewer for What’s On In London for almost 20 years. Mansel’s other great interest, classical music, has yielded several pieces on the work of Benjamin Britten and almost 200 articles based on interviews at the Royal Opera House, Covent Garden.

The co-editor of Film Review has contributed to the magazines Films Illustrated and Radio Times, as well as editing Montage, the London film societies magazine, for ten years. He stepped into the shoes of the late F Maurice Speed (the founding father of Film Review) as the editor of What’s On In London. As well as writing about films, Michael also reviews music theatre and cabaret for the Classical Source website.