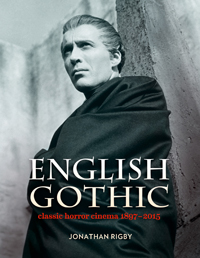 Widely acclaimed in both the UK and the US, English Gothic is regarded as the definitive study of British horror cinema. This was the first book to trace the rise and fall of the genre from its beginnings in the 1890s to the end of the 20th century, encompassing the lost films of the silent era, the Boris Karloff and Bela Lugosi chillers of the 1930s, the lurid classics from Hammer’s house of horror and the explicit shockers of the 1970s. In May 2015 English Gothic returns to print, complete with an assessment of the remarkable renaissance enjoyed by British horror in the 21st century. This deluxe 384-page hardback edition features a comprehensive section on television horror, a foreword by genre star Barbara Shelley, and a wealth of new illustrations.

Jonathan Rigby is an actor, critic and film historian. He is the author of English Gothic and Studies in Terror, two of the most highly regarded books on horror films published in the last 20 years. Jonathan’s other books include Christopher Lee: The Authorised Screen History and Roxy Music: Both Ends Burning. In recent years he was the series consultant on the BBC’s acclaimed documentaries A History of Horror with Mark Gatiss and Horror Europa with Mark Gatiss.