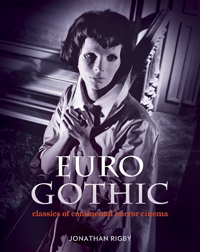 The author of the acclaimed film histories American Gothic (2007) and English Gothic (2015) returns with an in-depth study of the lurid horror fantasies that emerged from the studios of Italy, Spain, France and Germany. From the Expressionist reveries of the Weimar Republic to the transgressive nightmares smuggled past the Franco regime, via surrealist Gallic fever-dreams and psychedelic shockers from Cinecittà, Jonathan Rigby brings his incisive scrutiny to bear on more than 100 key films, starting in the aftermath of World War I and winding up with the video revolution of the early 1980s. The result is another absorbing chronicle of one of cinema’s most enduring but misunderstood genres.

Jonathan Rigby is an actor, critic and film historian. He is the author of English Gothic and Studies in Terror, two of the most highly regarded books on horror films published in the last 20 years. Jonathan’s other books include Christopher Lee: The Authorised Screen History and Roxy Music: Both Ends Burning. In recent years he was the series consultant on the BBC’s acclaimed documentaries A History of Horror with Mark Gatiss and Horror Europa with Mark Gatiss.